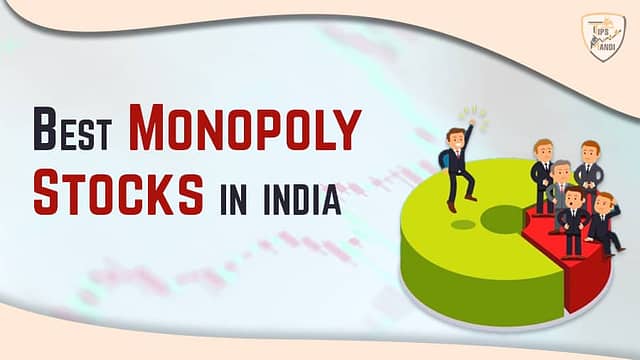 Monopoly means having exclusive control and possession of a company or a group in a particular industrial sector. In a country like India, creating a monopoly in the sector is not trivial. That is why these monopoly stocks in India grab some serious interest from investors in the stock market.

In view of the all-time successful American investor Warren Buffett, these companies are ‘Moat companies’. In Medieval India, Castles are surrounded by moats to protect them from the invaders. How robust the moat is, the chance of vulnerability of the castle is less.

‘Moat companies’ have a competitive advantage following some unique business tactics that allow them to earn sustainability for years to come in the business domain. These companies can build an entry barrier for other participants by offering some unique commodity or service; or by building trust among the consumers who, despite having other options, consumers prefer to buy this company’s products.

There are many monopoly shares in India, and we bring you the top 10 monopoly stocks in India

Coal India is the largest coal producer globally and is graded as a Maharatna company. This state-owned company has a clear-cut monopoly in coal mining and refining. Also, with over 2,72,000 employees, this is the seventh-largest employer in India.

This company contributes 82% of total coal production in India. Though in coming years, the Union government is planning to allow private players for commercial mining, which may break Coal India’s monopoly in the market, analysts suggest that Coal India could maintain its monopoly by becoming the dominant player.

Coal India is known as one of the highest dividend payers to investors.

IRCTC is a union government-owned company that engages in the business of railway ticketing, catering, and tourism service. The company is operated under the purview of the Ministry of Railways.

60% of the revenue of IRCTC comes from online ticket booking, while 20% from its catering business, 10% from tourism, and 10% from the rest.

Since its inception in 1959, the company has become the Country’s largest branded adhesive maker. With the invention of popular brands, like Fevicol, Feviquick, M-seal, Dr. Fixit, Roff, Chemifix, and Fevistick, the company enjoys a market share of over 70% in the industrial chemical and adhesive market.

The brands of Pidilite are so popular in every Indian household. Its Fevicol has now become synonymous with adhesives in India.

CONCOR is a public sector undertaking controlled by the Ministry of Railways, Govt. of India. Set up in 1988, the company holds a market share of 68.5% in cargo carriers, MMLP operations, and warehouse operations.

Container Corporation of India enjoys a monopoly in containerizing cargo transport in India. The company’s main objective is to develop multimodal transport logistics with a modern facility and provide infrastructural support to the country’s growing international trade.

CAMS keeps track of investors’ mutual fund transactions, including buying and redeeming mutual funds, updating investors’ personal information, and altering bank mandates. In India, the Mutual Funds segment is gaining popularity every coming day, and the future is very bright for MF and so with CAMS.

IEX is India’s premier electricity marketplace and provides a nationwide automated trading platform for physical electricity and renewables delivery. The company has over 95% of the market share in the energy exchange domain.

IEX has a pithy ecosystem of 6,800 participants across 29 states and 5 UTs with over 55 distribution utilities and 500 generators. The company has a strong consumer base of over 4,400, mostly commercial and industrial consumers of metal, textile, ceramic, cement, chemical, automobiles, IT, housing, and real estate.

MARICO belongs to the Indian EMCG sector. Established in 1990, the company offers a wide range of consumer products in India’s beauty and wellness space and over 25 countries worldwide.

MARICO is the creator of popular brands like Parachute, Saffola, Livon, Revive, and Set Wet. While it holds a market share of 73% in the refined edible oil segment, Parachute holds 59% of the market share in the hair care oil segment. Almost 90% of the income of MARICO comes from these two brands.

HAL is another monopoly stock in the Indian defence sector and plays a crucial role. Established in 1940 with the motto of manufacturing aircraft in India, now owned by the Govt. of India.

The Indian Share Market has seen an inflow of new investors in the last couple of years. In FY21 alone, 1.43 crore Demat accounts were registered with NSDL & CDSL. Only two Depository Participants are available on the Indian Stock Exchange, but since NSDL is not listed on the stock exchange, CDSL enjoys its monopoly in the domain.

CDSL is the first listed central securities depository and a division of SEBI, India. Recently, CDSL became the first depository to open 6 crores of active Demat accounts. With the growth of the Indian stock market, CDSL will also grow, and so its investor’s wealth.

Once owned by Govt. of India and now became a subsidiary of Vedanta Limited, Hindustan Zinc is the world’s second-largest Zinc producer and one of the world’s largest lead and silver producers. Hindustan Zinc holds a market share of 77% in the country’s zinc and mining industry.

The company is one of the lowest-cost zinc producers globally and Inia’s only integrated producer of zinc, silver, lead, and cadmium. At the same time, Vedanta Limited holds a 64.9% stake in the company, and 35% shares vests with the former owner Government of India.

Let’s have a look at a comparison table of all discussed company’s financials: